This article was originally published in The New York Times, and can be found in its entirety here: https://nyti.ms/3j8JBa9

A Canadian woman was so desperate to hug her mother during quarantine that she created a “hug glove” using a clear tarp with sleeves so the women could hug through the plastic. A video of two young cousins in Kentucky hugging and weeping after weeks apart in quarantine was shared thousands of times.

“We did not expect for them to react the way they did,” said Amber Collins, who recorded the reunion of her 8-year-old son, Huckston, with his cousin Rosalind Arnett, age 10. “They were so overjoyed they didn’t know how to express themselves, except to cry. This hug shows how powerful the human touch truly is.”

Not only do we miss hugs, we need them. Physical affection reduces stress by calming our sympathetic nervous system, which during times of worry releases damaging stress hormones into our bodies. In one series of studies, just holding hands with a loved one reduced the distress of an electric shock.

“Humans have brain pathways that are specifically dedicated to detecting affectionate touch,” says Johannes Eichstaedt, a computational social scientist and psychology professor at Stanford University. “Affectionate touch is how our biological systems communicate to one another that we are safe, that we are loved, and that we are not alone.”

To learn the safest way to hug during a viral outbreak, I asked Linsey Marr, an aerosol scientist at Virginia Tech and one of the world’s leading experts on airborne disease transmission, about the risk of viral exposure during a hug. Based on mathematical models from a Hong Kong study that shows how respiratory viruses travel during close contact, Dr. Marr calculated that the risk of exposure during a brief hug can be surprisingly low — even if you hugged a person who didn’t know they were infected and happened to cough.

Here’s why. We don’t know the exact dose required for the new coronavirus to make you sick, but estimates range from 200 to 1,000 copies of the virus. An average cough might carry anywhere from 5,000 to 10,000 viruses, but most of the splatter lands on the ground or nearby surfaces. When people are in close contact, typically only about 2 percent of the liquid in the cough — or about 100 to 200 viruses — would be inhaled by or splashed on a person nearby. But only 1 percent of those stray particles — just one or two viruses — actually will be infectious.

“We don’t know how many infectious viruses it takes to make you sick — probably more than one,” said Dr. Marr. “If you don’t talk or cough while hugging, the risk should be very low.”

There’s tremendous variability in how much virus a person sheds, so the safest thing is to avoid hugs. But if you need a hug, take precautions. Wear a mask. Hug outdoors. Try to avoid touching the other person’s body or clothes with your face and your mask. Don’t hug someone who is coughing or has other symptoms.

And remember that some hugs are riskier than others. Point your faces in opposite directions — the position of your face matters most. Don’t talk or cough while you’re hugging. And do it quickly. Approach each other and briefly embrace. When you are done, don’t linger. Back away quickly so you don’t breathe into each other’s faces. Wash your hands afterward.

And try not to cry. Tears and runny noses increase risk for coming into contact with more fluids that contain the virus.

While some of the precautions may sound like a lot of effort for a simple hug, people need options given that the pandemic will be with us for a while, said Julia Marcus, an infectious disease epidemiologist and assistant professor at Harvard Medical School.

“There’s a real challenge right now for older people who worry that they won’t be able to touch or connect with family for the rest of their lives,” said Dr. Marcus. “Keeping hugs brief is particularly important because the risk of transmission increases with more prolonged contact.”

Here are the Dos and Don’ts of hugging, based on the advice of Dr. Marr and other experts. 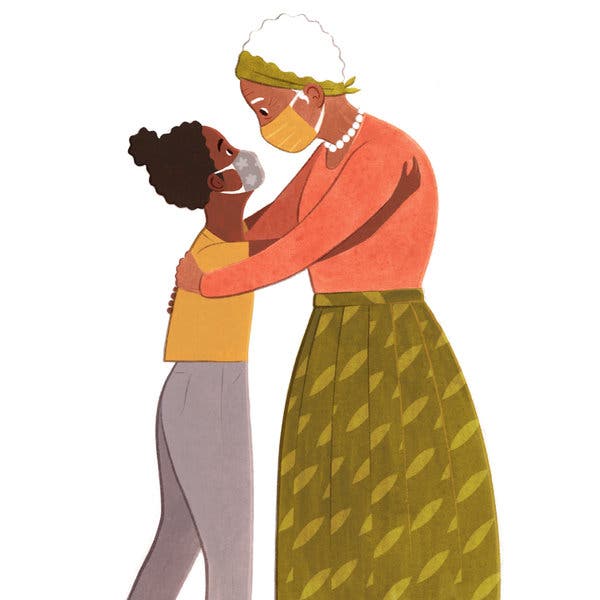 “This position is higher risk because the faces are so close together,” said Dr. Marr. “When the shorter person looks up, their exhaled breath, because of its warmth and buoyancy, travels up into the taller person’s breathing zone. If the taller person is looking down, there is opportunity for the huggers’ exhaled and inhaled breaths to mingle.” 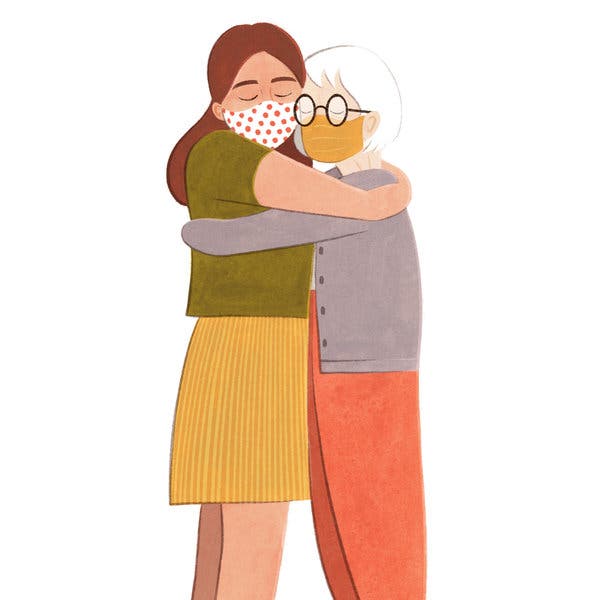 This position, with both huggers looking in the same direction, also is higher risk because each person’s exhaled breath is in the other person’s breathing zone. 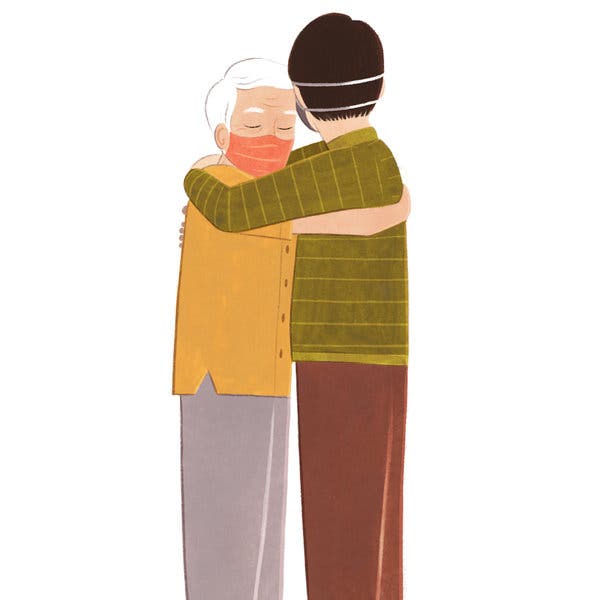 DO hug facing opposite directions

For a safe, full-body hug, turn your faces in opposite directions, which prevents you from directly breathing each other’s exhaled particles. Wear a mask. 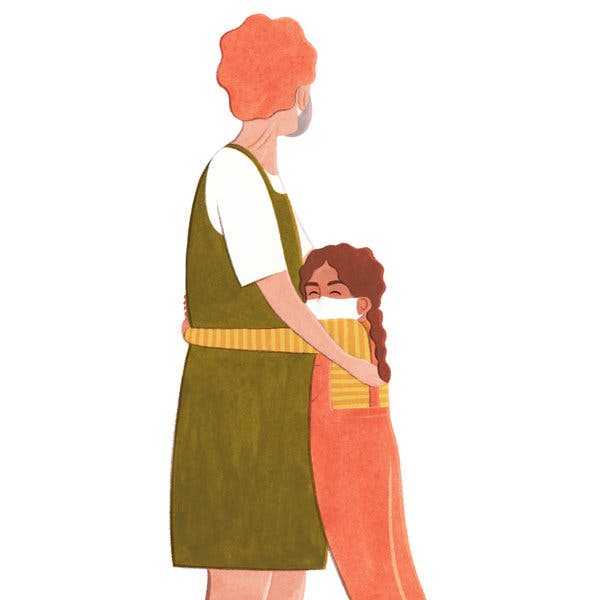 DO let children hug you around the knees or waist

Hugging at knee or waist level lowers risk for direct exposure to droplets and aerosols because faces are far apart. There is potential for the child’s face and mask to contaminate the adult’s clothing. So you might consider changing clothes, and wash your hands after a visit that includes hugs. The adult also should look away so as not to breathe down on the child.

DO kiss your grandchild on the back of the head

In this scenario, the grandparent is minimally exposed to the child’s exhaled breath. The child could be exposed to the taller person’s breath, so kiss through a mask.

Julian Tang, a virologist and associate professor at the University of Leicester in England who studies how respiratory viruses travel through the air, said he would add one more precaution to a pandemic hug: Hold your breath.

“Most hugs last less than 10 seconds, so people should be able to manage this,” Dr. Tang said. “Then back away to at least two meter separation before talking again to allow them to catch their breath at a safe distance. Holding your breath stops you exhaling any virus into their breathing zone, if you are unknowingly infected — and stops you inhaling any virus from them, if they are unknowingly infected.”

Yuguo Li, a University of Hong Kong engineering professor and senior author on the paper that Dr. Marr cited to make the calculations, said that hugs probably pose less risk than a longer face-to-face conversation. “The exposure time is short, unlike conversation, which can be as long as we like,” he said. “But no cheek kissing.”

Dr. Li said the risk of viral exposure may be highest at the start of the hug, when two people approach each other and could breathe on each other, and at the end, when they pull apart. Wearing a mask is important, as is hand washing, because there’s a low risk of picking up the virus from another person’s hands, skin or clothes.

Dr. Marr noted that because the risk of a quick hug with precautions is very low but not zero, people should choose their hugs wisely.

“I would hug close friends, but I would skip more casual hugs,” Dr. Marr said. “I would take the Marie Kondo approach — the hug has to spark joy.”