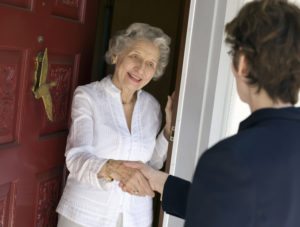 Paul was returning home after being diagnosed with a rare neurological disorder that affected his strength and ability to walk. He was happy to be home but he recognized that there were challenges ahead. His muscles were weak and he had to relearn many physical activities that most of us take for granted.

Androscoggin Home Healthcare and Hospice was selected to work with Paul in his home, and he couldn’t wait to get started. The occupational and physical therapists worked with him to build up his strength in the hope that he would be able to navigate his way around the home. They talked about his disorder and what he should expect.

When the work began, the only way Paul could get up the stairs to his bedroom was by sitting on a stair and scooting himself up – stair-by-stair. This was frustrating for a proud man who had always been in good physical shape and independent. Getting around the house was a chore and required a walker. And things like holding a glass of water and drinking from it brought challenges as well.

While others may have been overwhelmed, Paul was motivated and wanted to work at something each day. Androscoggin was able to meet his needs, providing some form of therapy five days a week. The services that Androscoggin provided combined with Paul’s aggressive approach made a real difference.

The first milestone was moving from a walker to two crutches and shortly thereafter, he was able to walk up the stairs using one crutch while holding onto the railing.

Today, Paul no longer needs crutches, he’s no longer confined to home and he’s been able to return to most of the things he enjoys in life, including spending quality time with his wife, kids, and grandchildren.

At Androscoggin, we’re committed to doing all that we can to get you back to the highest level of independent living possible. Should the time come that you need any of our services, we would consider it an honor to work with you.